Airbnb and the rent gap: Paper published in Environment and Planning A 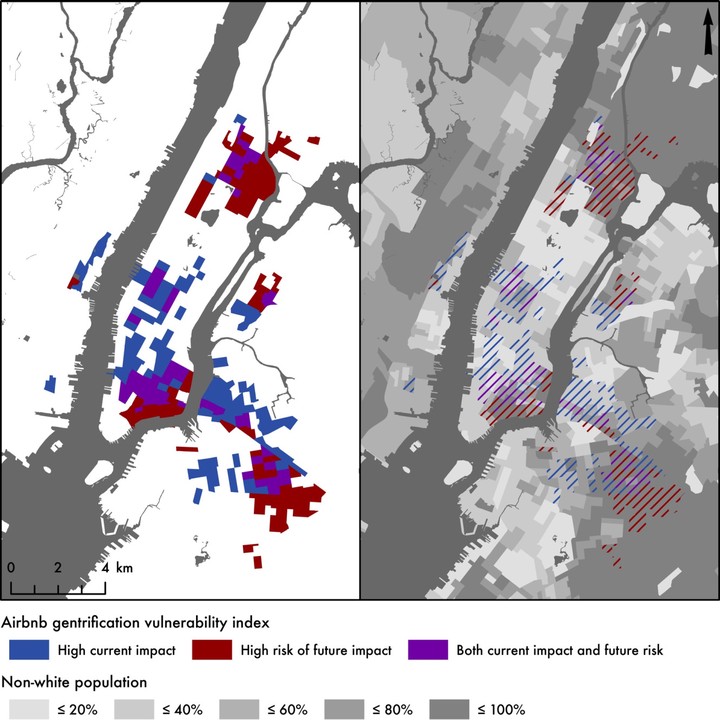 We’re happy to announce that our paper, “Airbnb and the rent gap: Gentrification through the sharing economy” has now been published in Environment and Planning A: Economy and Space. The paper argues that short-term rentals have facilitated a form of gentrification that does not require redevelopment, by introducing a major new revenue flow into urban land markets. We use spatial analysis to precisely measure the impacts of Airbnb on NYC’s land and housing markets, and discuss the implications.

Airbnb and other short-term rental services are a topic of increasing interest and concern for urban researchers, policymakers and activists, because of the fear that short-term rentals are facilitating gentrification. This article presents a framework for analyzing the relationship between short-term rentals and gentrification, an exploratory case study of New York City, and an agenda for future research. We argue that Airbnb has introduced a new potential revenue flow into housing markets which is systematic but geographically uneven, creating a new form of rent gap in culturally desirable and internationally recognizable neighbourhoods. This rent gap can emerge quickly—in advance of any declining property income— and requires minimal new capital to be exploited by a range of different housing actors, from developers to landlords, tenants and homeowners. Performing spatial analysis on three years of Airbnb activity in New York City, we measure new capital flows into the short- term rental market, identify neighbourhoods whose housing markets have already been significantly impacted by short-term, identify neighbourhoods which are increasingly under threat of Airbnb-induced gentrification, and measure the amount of rental housing lost to Airbnb. Finally, we conclude by offering a research agenda on gentrification and the sharing economy.

The paper also includes an extensive methodological appendix, which should allow any other researcher to replicate or extend our methodology in other cities, and provides transparency about how we reached the conclusions we did.

The final author draft of the paper is freely available to download.